Why Isn’t Wall Street in Jail?

Here is this great article written by Matt Taibbi.  I can now see clearly, that the same people who are involved in Political Fund Raising or Fund Direction (towards Political Parties) are the very same people who are either conjuring, managing or at the least, taking advantage of Financial Crimes and Misdemeanors.  Regardless, everyone involved, everyone, from the (current) President on down is involved in this malfeasance, a product of a corrupt partnership and system wherein the culprits are immune to prosecution and incarceration.

In this article, Matt makes reference to my favorite person of the last two decades, a person who would have stopped (if she were allowed to do so)  ‘Black Box’ trading and tried to warn (if they would have listened and acted upon her warning) Alan Greenspan, Robert Rubin and Larry Summers of the possible and impending implosion of the Derivatives Market…Brooksley Born, Head  of the Commodity Futures Trading Commission, an attorney, with 20 years experience in Derivative Law.

Historically, it was Lehman Brother’s failure, the collapse of the Derivative’s Market, and the calling of Credit Default Swaps on those Derivatives that led to the collapse of AIG and the shocking revelation to the unwitting general public of the Systemic Fraud and Manipulation in the Financial Marketplace with Credit being frozen,  Countless Hundreds of Billions of Dollars of Personal Wealth & Savings, Governmental and Private Pension Fund Assets being lost and then TARP Funds being disbursed as compensation and reward for alleged and yet to be charged Wall Street High Crimes and Misdemeanors.

Again, please watch last night’s episode of Real Time to see Bill’s interview with Matt.  If it weren’t so humorous, it would make you nauseous.  Perhaps it will do both.

If you don’t have access to HBO, or want more information and a body of knowledge  where you can CLEARLY see the story unfold, please watch the pbs Frontline episode, The Warning followed by Inside The Meltdown and Breaking the Bank.

Watch The Warning on PBS. See more from FRONTLINE.

If you’ve got the time, go see the Charles Ferguson Award Winning Documentary, INSIDE JOB (2010) or better yet, buy it on Amazon and watch it until you know it by heart. 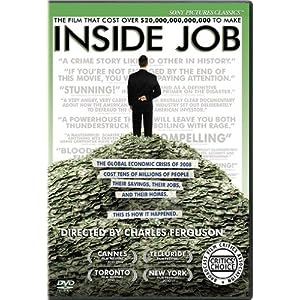 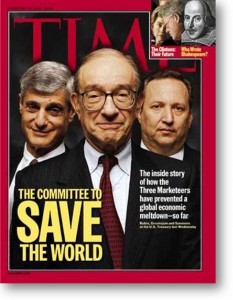 Committee to Save the World, Economist Heroes?